I was able to get access to the software in IBM and give it a go with our vSphere lab in Melbourne running on XIV storage.  The IBM Upward Integration for VMware vSphere plugin (or UIV) was less than 100MB in size and contained the following files:

After reading the release notes (or so I thought I did, see below) I began the process of installing the plug-in by running the IBM_plugin_for_VMware_vSphere_Client_x64.exe on my vSphere server and entering in the vCenter server’s IP address.  So far so good.  I then followed the instructions and put my ESXi server into maintenance mode, and using the vihostupdate.pl   inserted the plugin bundle into my ESXi test server.  The command I used was the following:

After restarting the ESXi and taking it out of maintenance mode I browsed to my ESXi server and went to the IBM Upward Integration tab to unfortunately be greeted with the following error:

OK, what did I do?  After reading the release notes again (RTFM!) I noticed I’d overlooked that the plugin requires the use of the VMware vSphere Hypervisor (ESXi) 4.1 U1 with IBM Customization (or IBM customised ESXi for short) which provides a number of additional hardware management features and drivers for IBM hardware.

After updating my server with the IBM customised ESXi, and repeating the vihostupdate.pl above, I was greeted with a working plugin as shown below.  Yay!

The System Analysis screen shows key hardware and software information on the ESXi host.  I clicked the Refresh button for the the UIV to begin it’s analysis and it took a few minutes to complete on my ESXi HS22 blade.  I guess I could then then send this info to IBM support if requested.  I assume this would be by sending logs from the C:\IBM_Support directory on my vCenter server.   If I get any other info I’ll post it here. 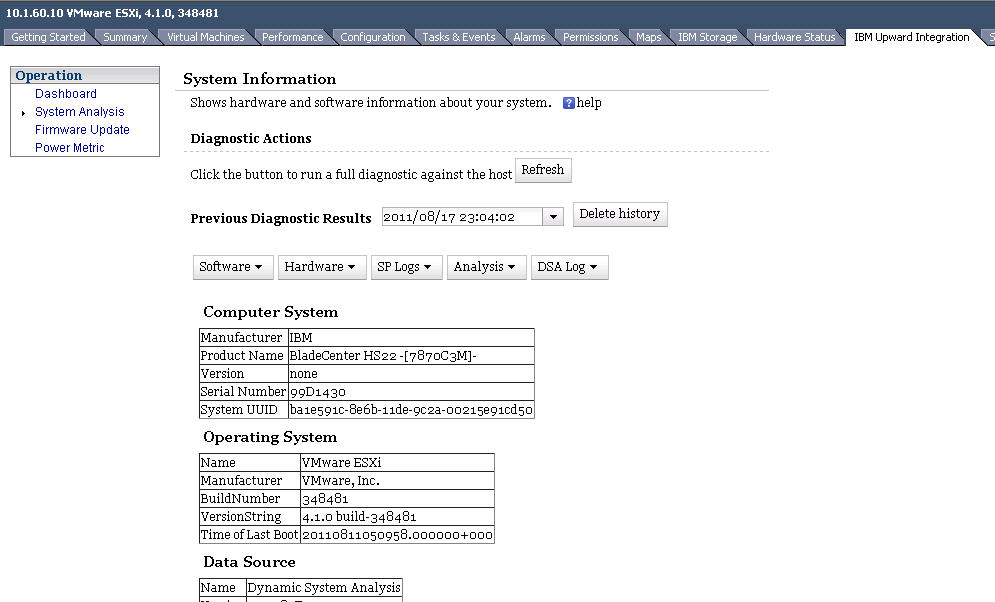 The firmware update screen allows you to check for the latest IBM firmware updates for your ESXi host, without ever leaving the vCenter console.  I’ve been testing this with a HS22 blade and will post additional info as I expand this testing to other IBM ESXi hosts in the coming weeks. 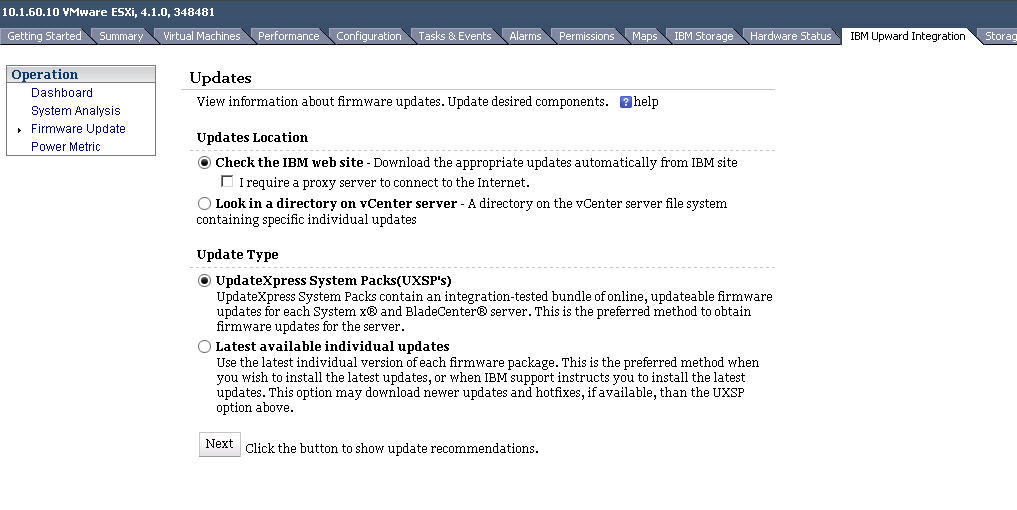 The Power Metric screen provides current power usage information for the ESXi host.  You simply have to click the Enable button and entering credentials for the ESXi host for it to begin collecting info.

From what I can see, the plugin also added extra Power info into the core vCenter Performance monitor.  I could then graph the overall power used by the ESXi host and the energy used by each of the VM’s if I wanted too.  Depending on your business, this might not be a gimmick but the ability for you to charge back power (or simply account for it) that is used by a VM to an internal department or a customer if you’re a cloud provider running on vSphere.

The plug-in user guide is available to download here.

I’d love to hear your experiences too on how the plug-in works in your VMware vSphere environment, which I can pass back to our product management teams.  As I find out additional information, I’ll post them to my blog.